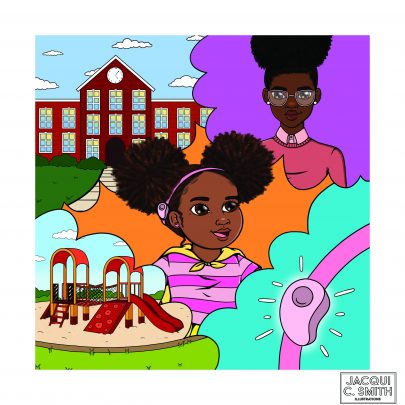 Illustrator Jacqui C. Smith creates unique artwork that showcases diversity amongst women of color. After graduating from Columbia College of Chicago with a B.A. in Traditional Animation, Jacqui headed to Burbank California to begin her journey as a freelance artist.

In the last ten years, Jacqui’s created children’s books and illustrations for self-publishers, publishing companies, and businesses including Duck Studios Animation, Disney, YWCA, and more. When she’s not working on commissions, you can find Jacqui at festivals and conventions throughout Los Angeles and selling her artwork at boutiques and galleries across the U.S. Also, Jacqui’s created four coloring books, “Know Yourself: A Coloring Book for Girls (& Women)”, that focus on positive self-identity and relaxation for women and girls of color.

Jacqui recently designed the “Beautiful Skin” Beer can for Brewyard Beer Company in Glendale with donations going to the Glendale/Pasadena YWCA to fight social injustice and showcase local women of color owned businesses. In addition to creating beer can art, Jacqui also partnered with the Brewyard to create an annual Brewyard Art Festival in June 2017. She has also worked on community projects for Wonder of Women, YWCA Pasadena/ Glendale, and 11:11 ACC. Jacqui was also recently featured in LA Weekly, Voyage LA, Shoutout LA, and Hopped LA.

​Jacqui’s interest in illustration amplified after going to many events throughout Los Angeles and rarely seeing women of color artists represented. She began having conversations about race, representation, beauty standards, and female strength at every art show she attended. These discussions all stem from the same place: there needs to be better treatment, representation, and acceptance of women of color, and Jacqui hopes that her art serves as a reminder that they should not be overlooked.

Job is done or money back
How it works

I create colorful children's book illustrations that are perfect for children of all ages.

1 job represents 1 illustration. Please choose a job quantity that reflects the number of illustrations you'd like to purchase.

I create colorful children's book illustrations that are perfect for children of all ages.

1 job represents 1 illustration. Please choose a job quantity that reflects the number of illustrations you'd like to purchase.

The maximum delivery time represents the first delivery of sketches.

What's the minimum number of Illustrations I can get?